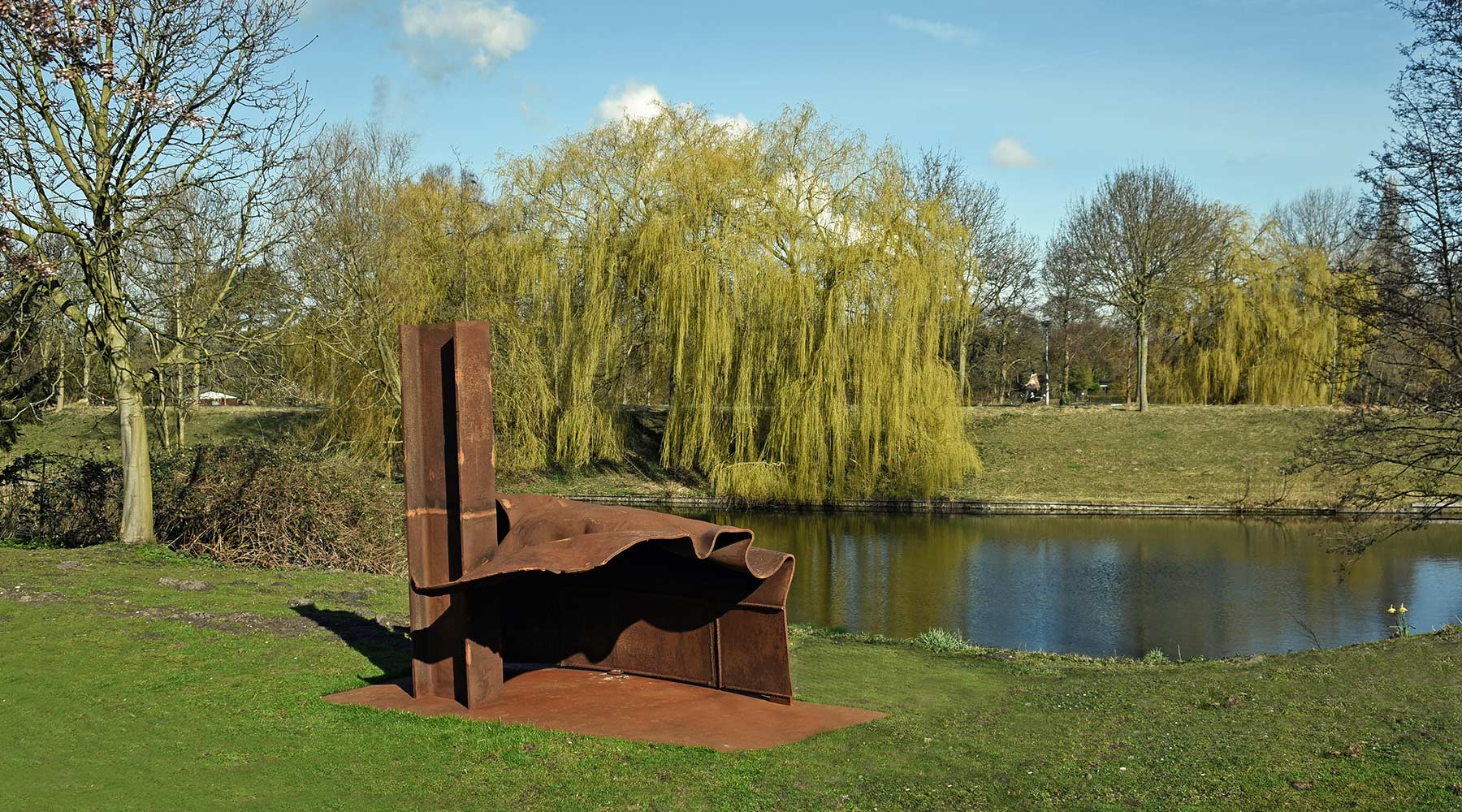 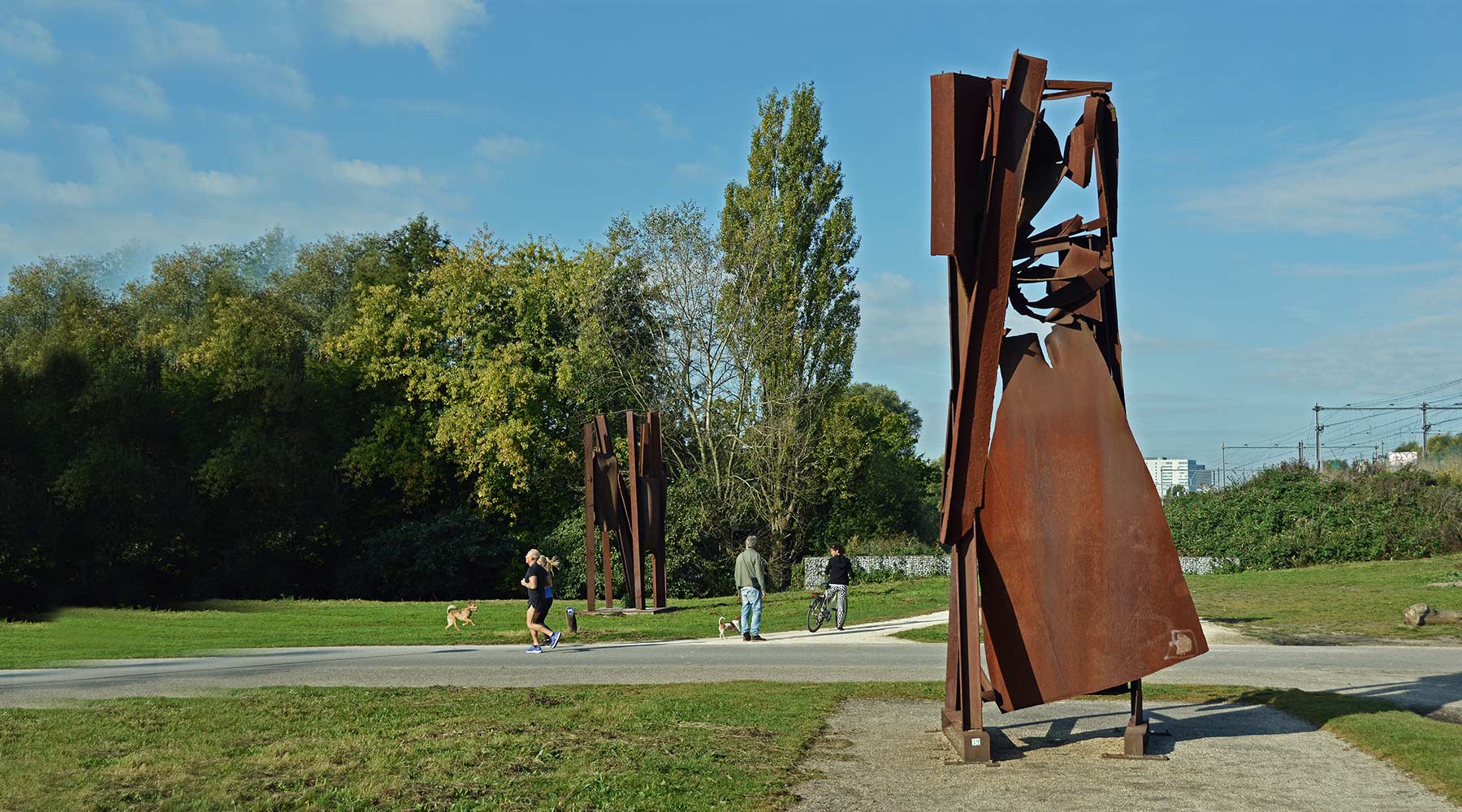 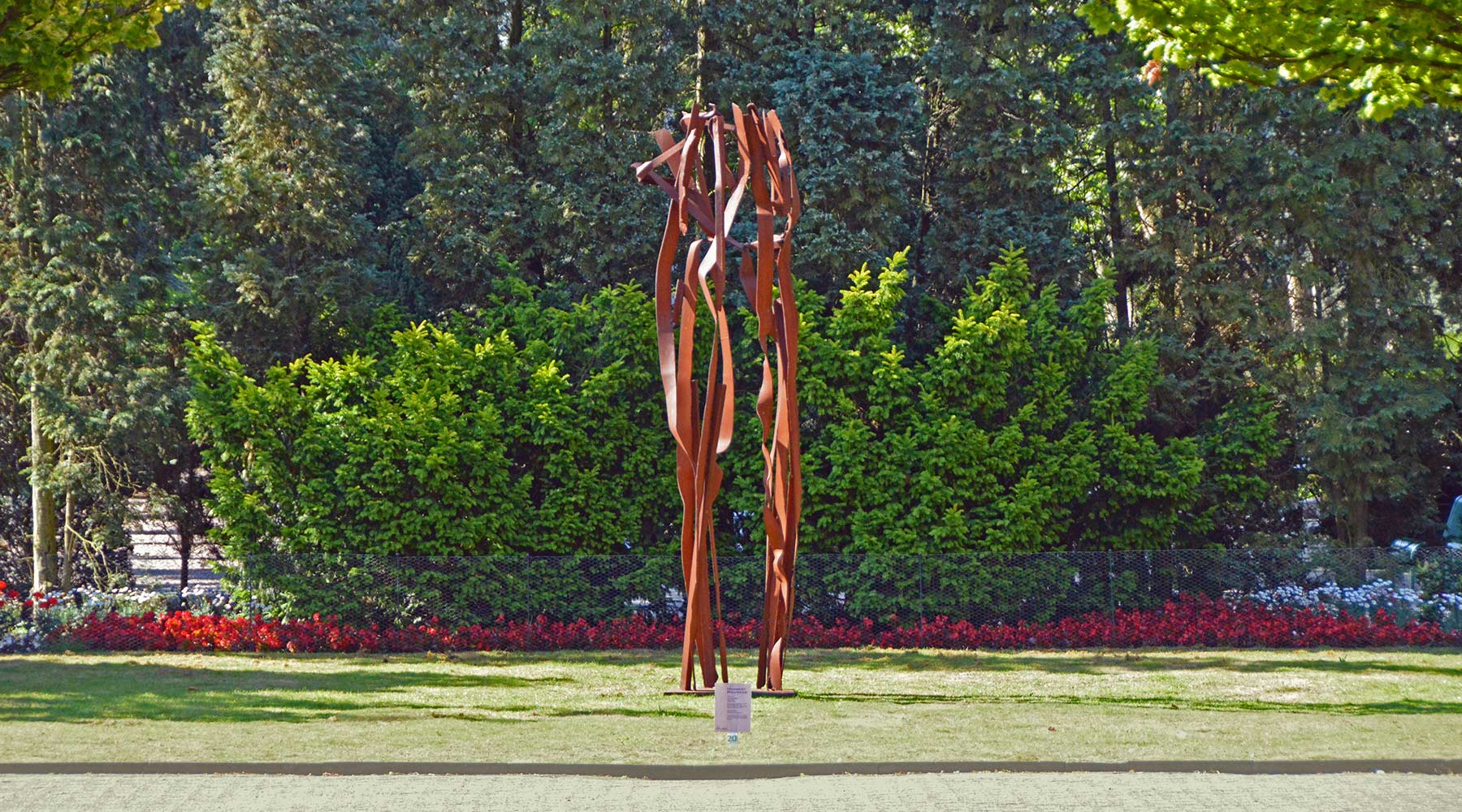 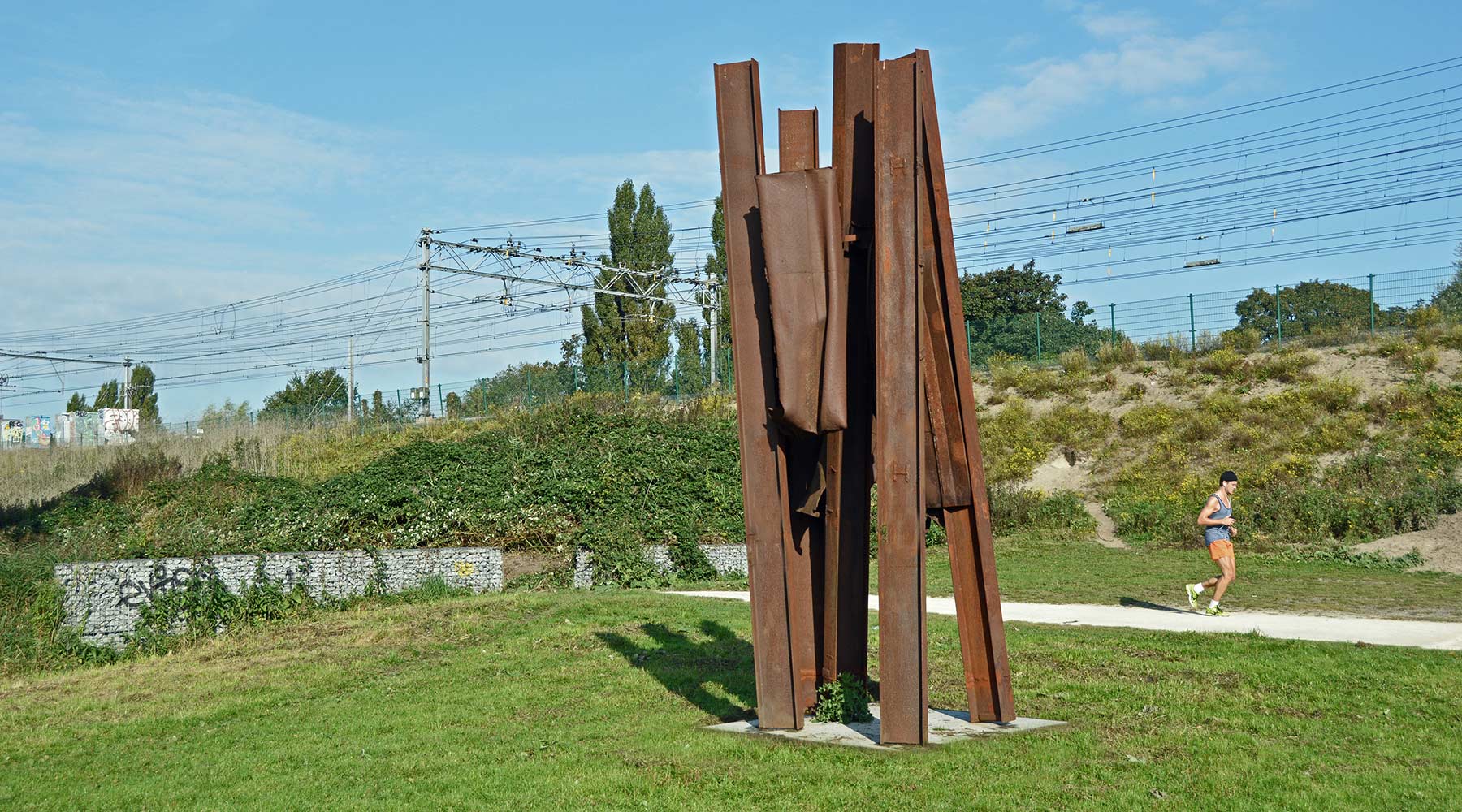 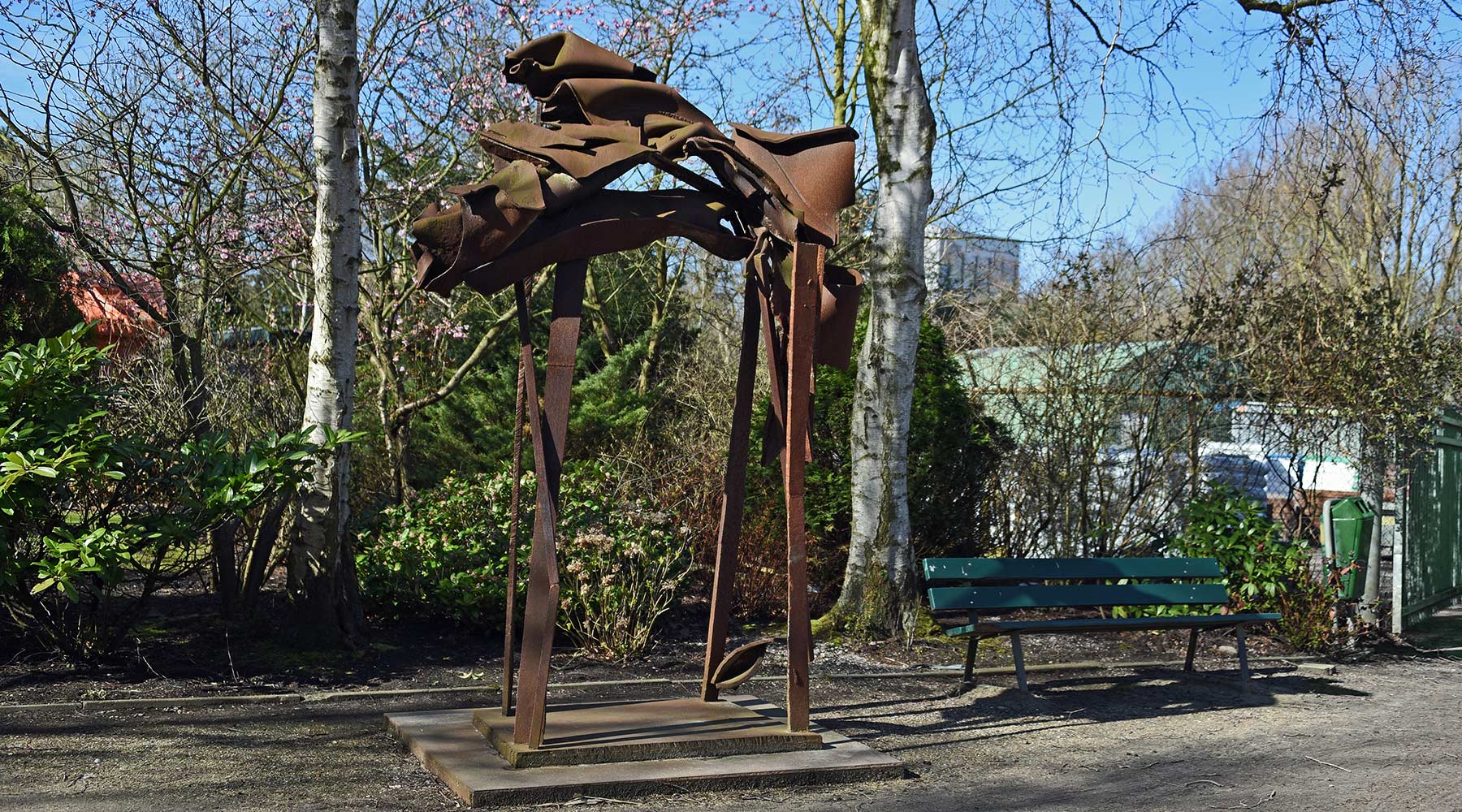 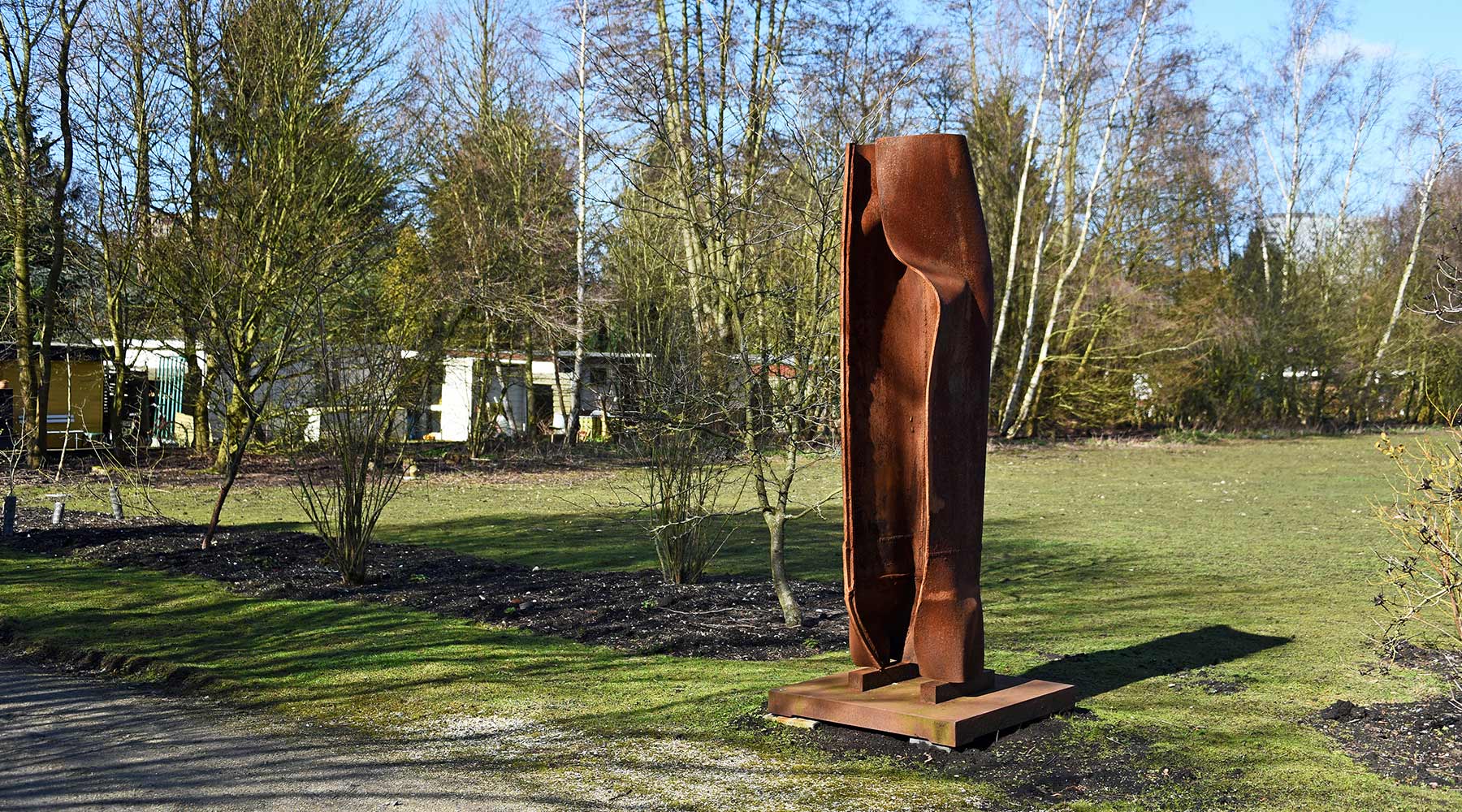 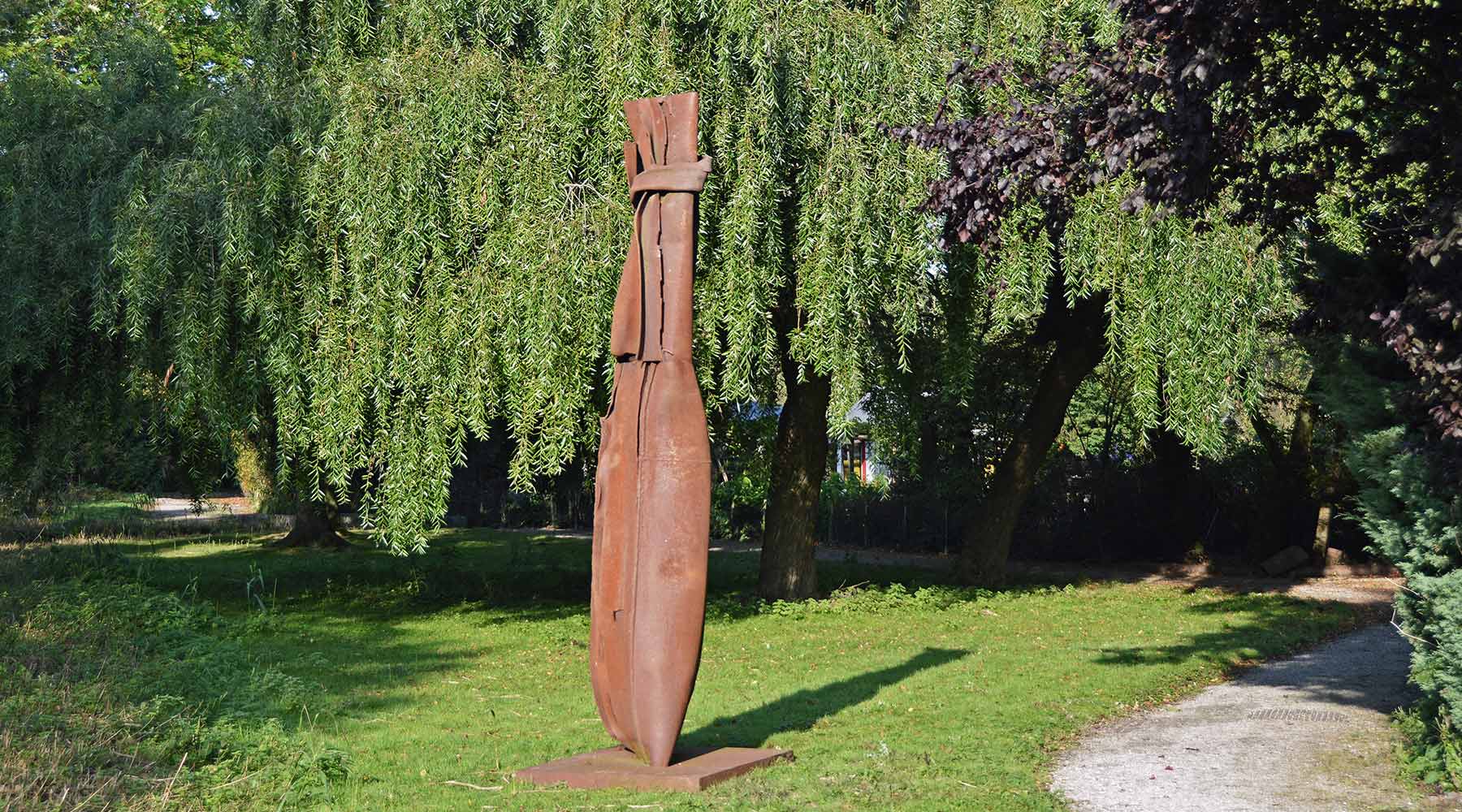 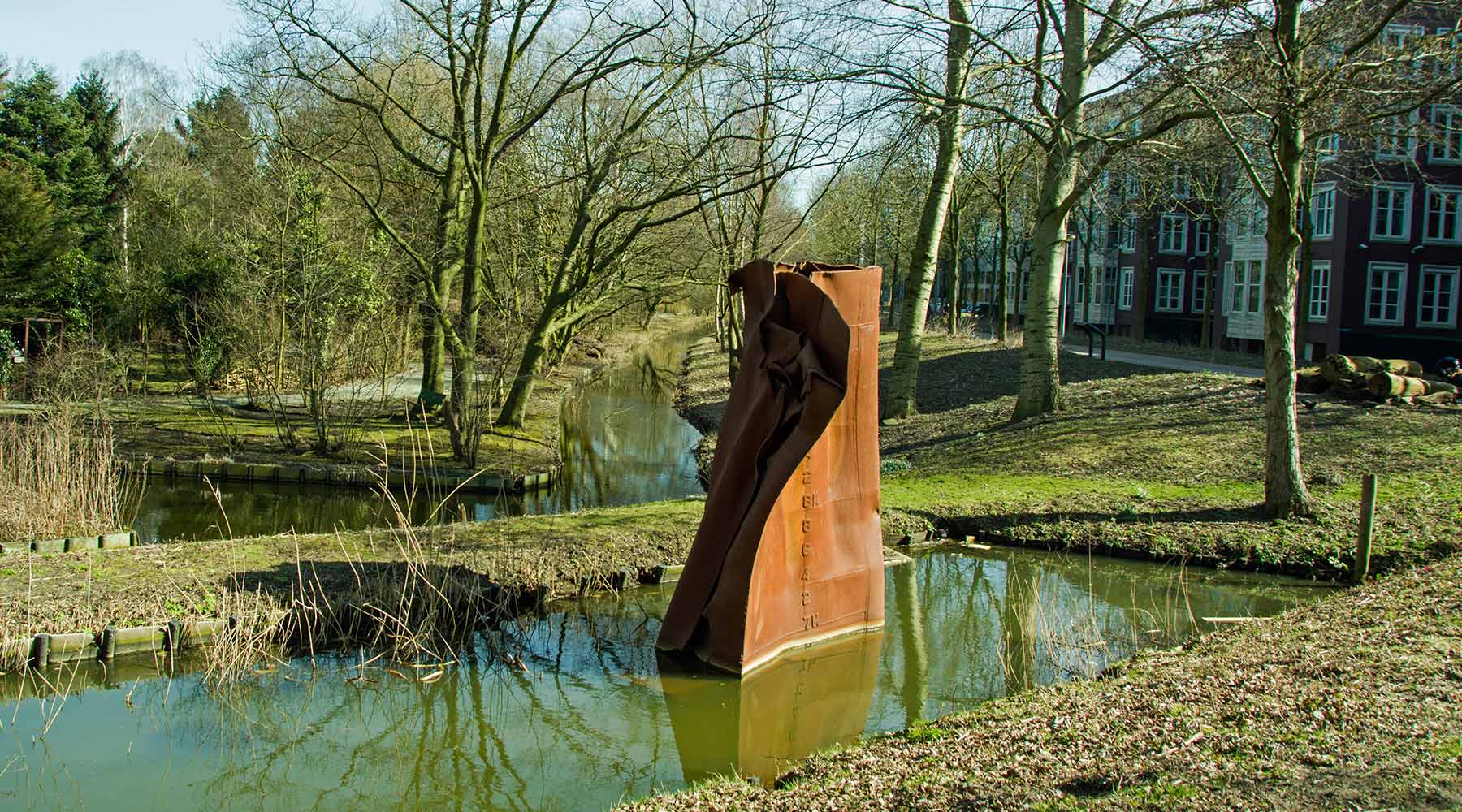 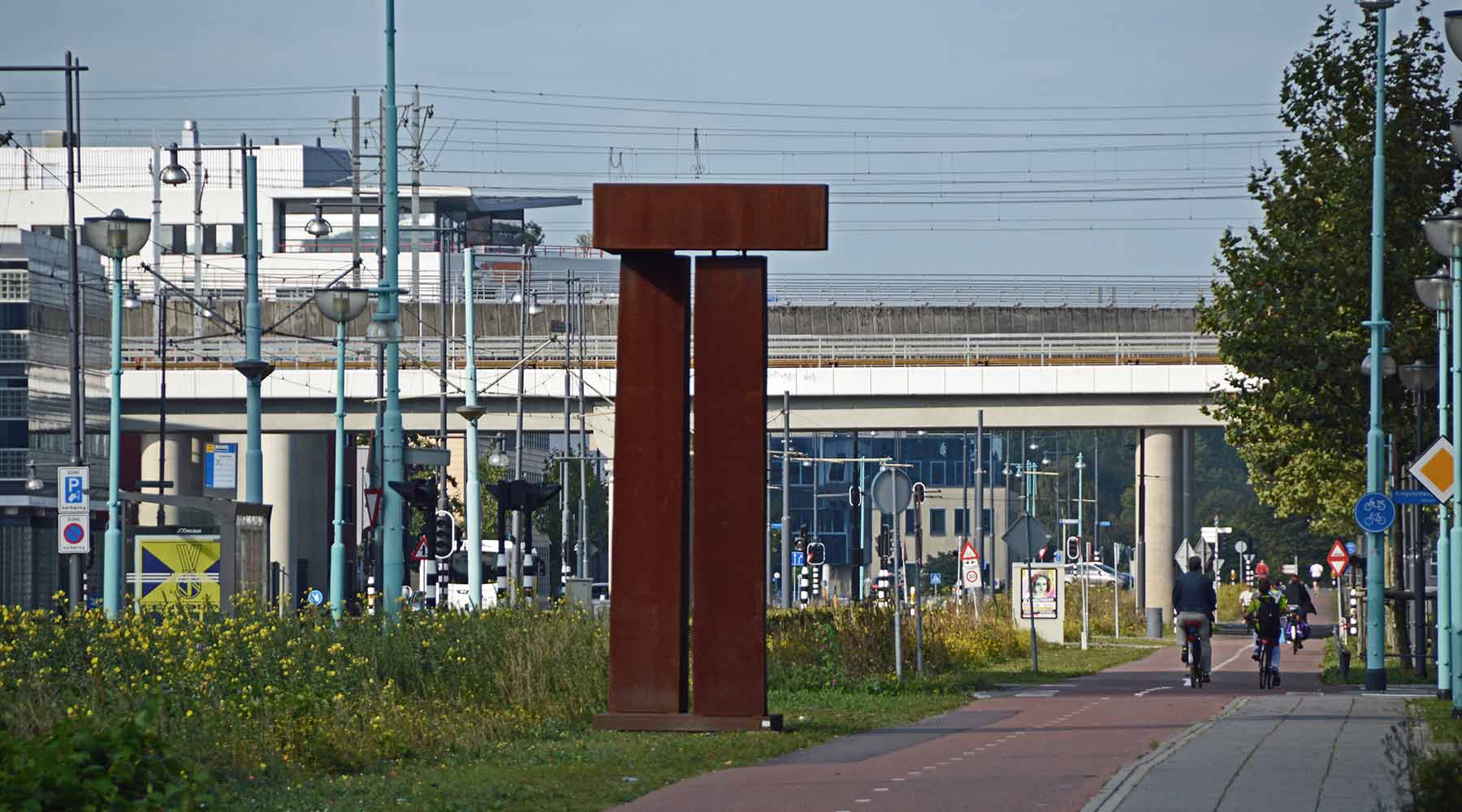 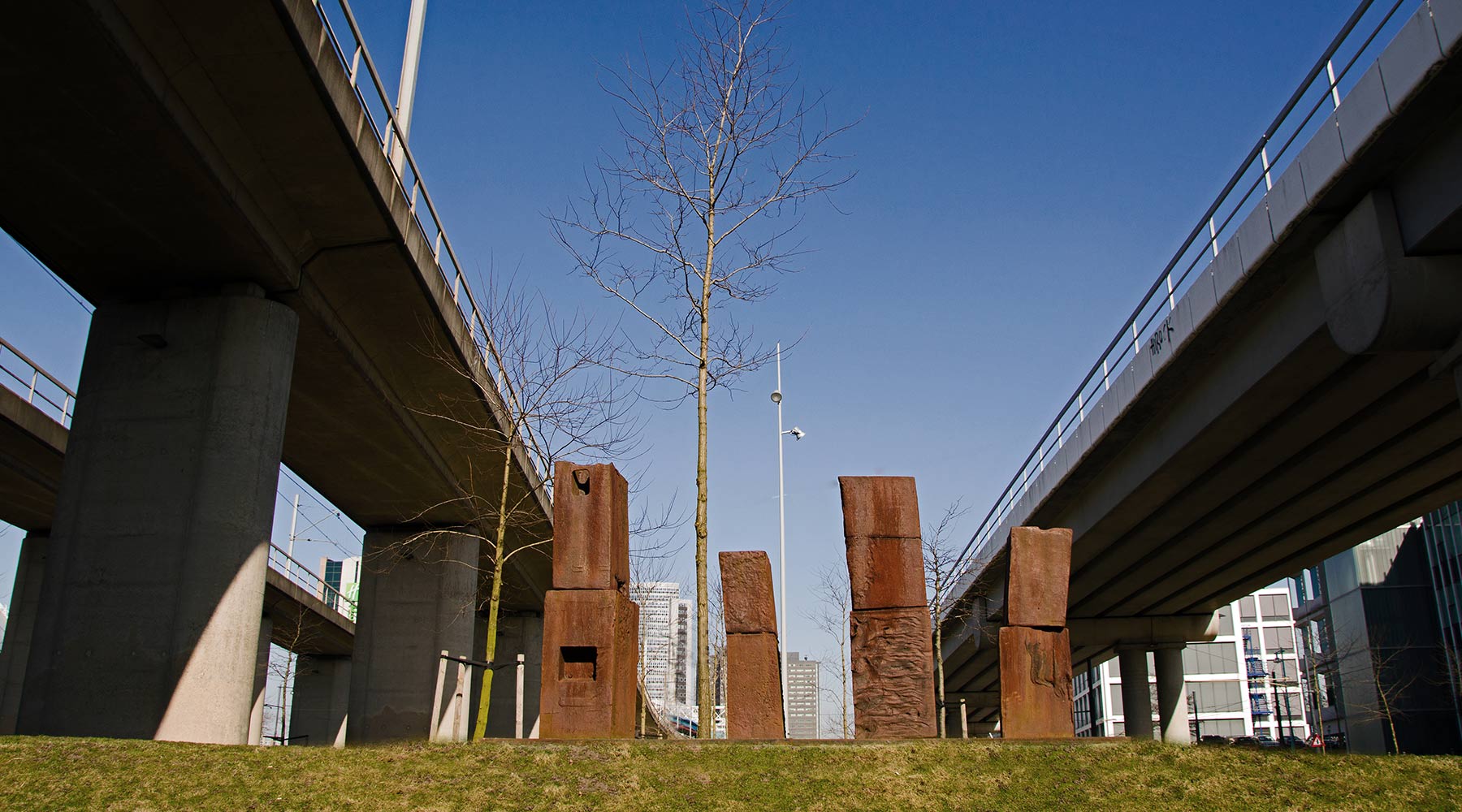 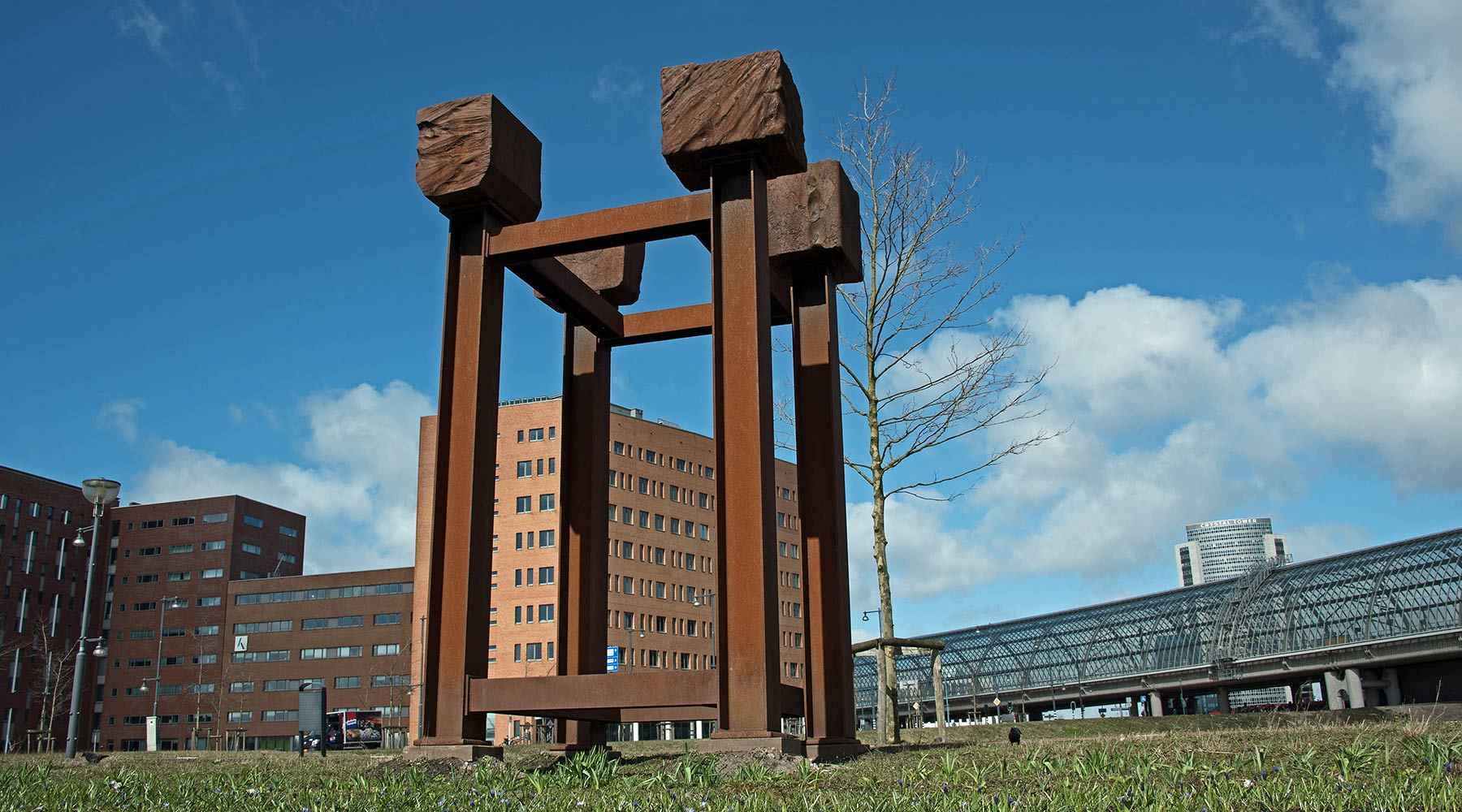 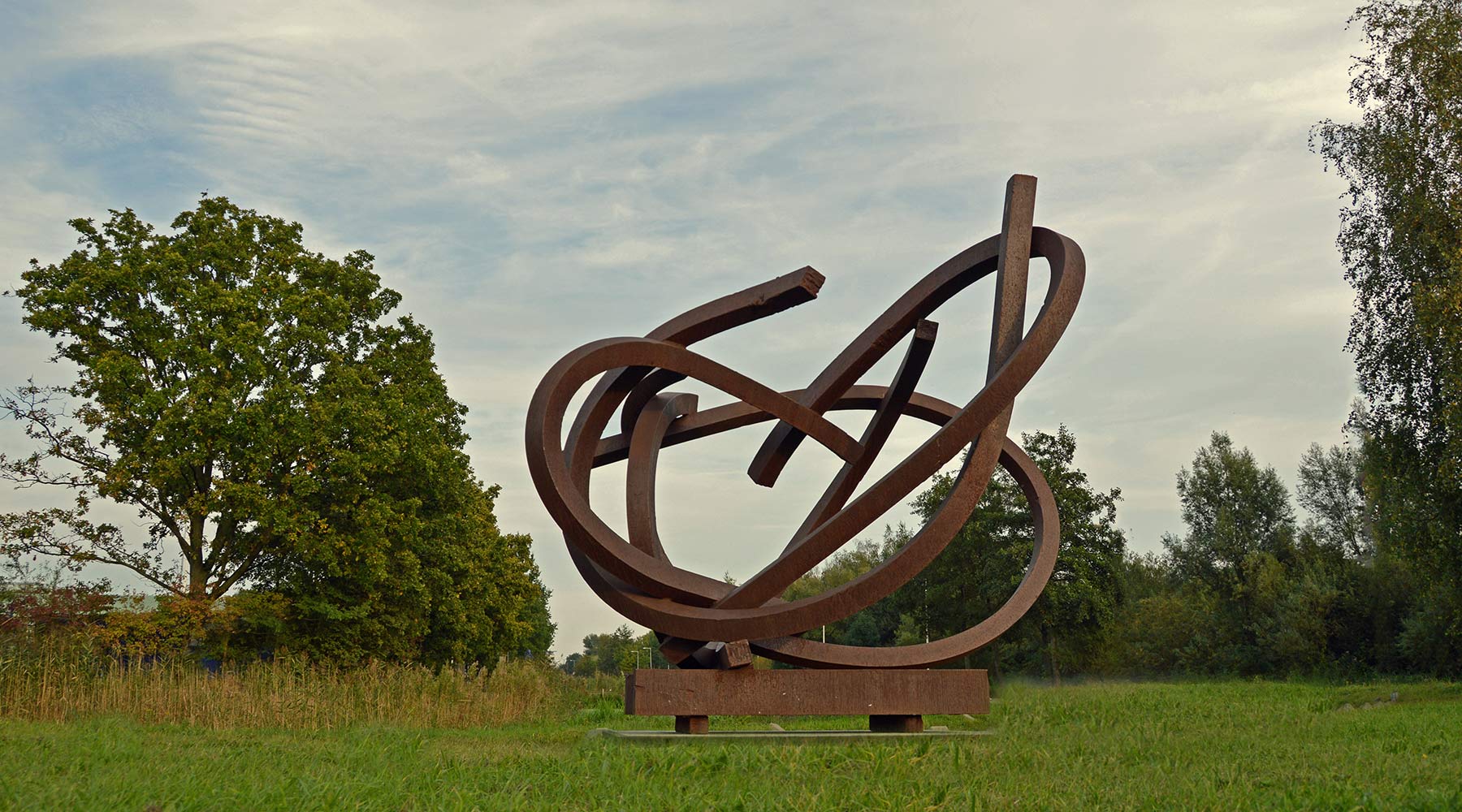 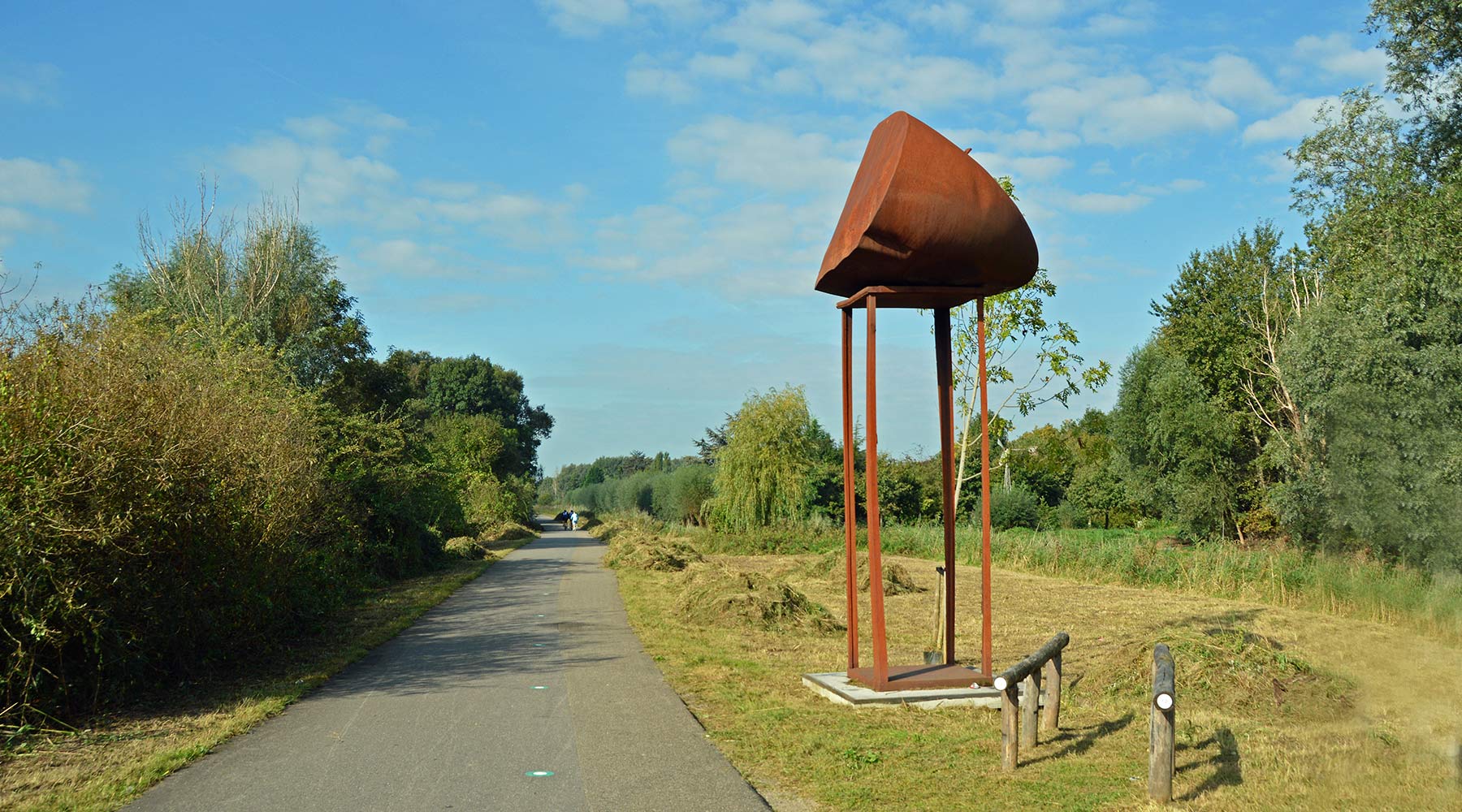 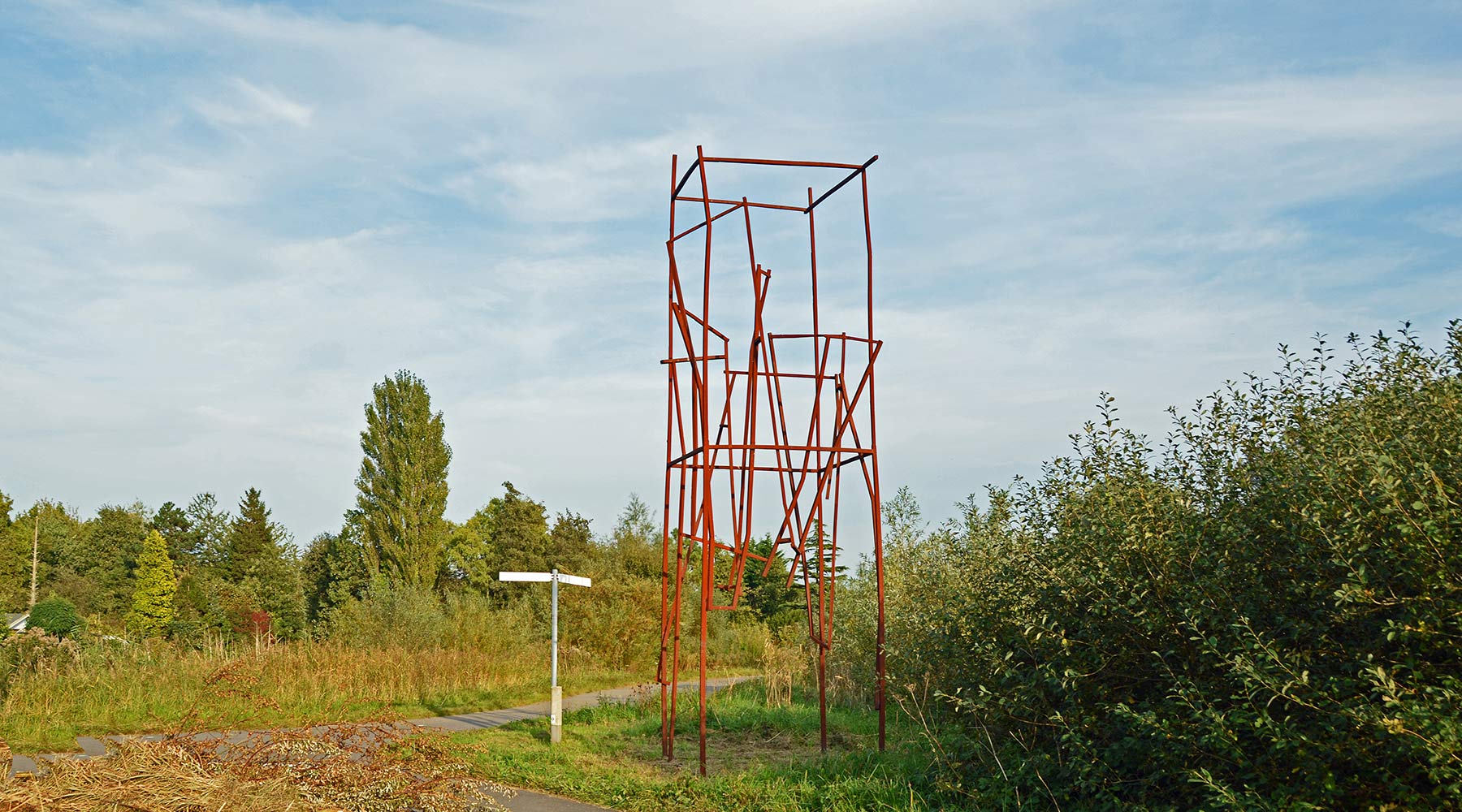 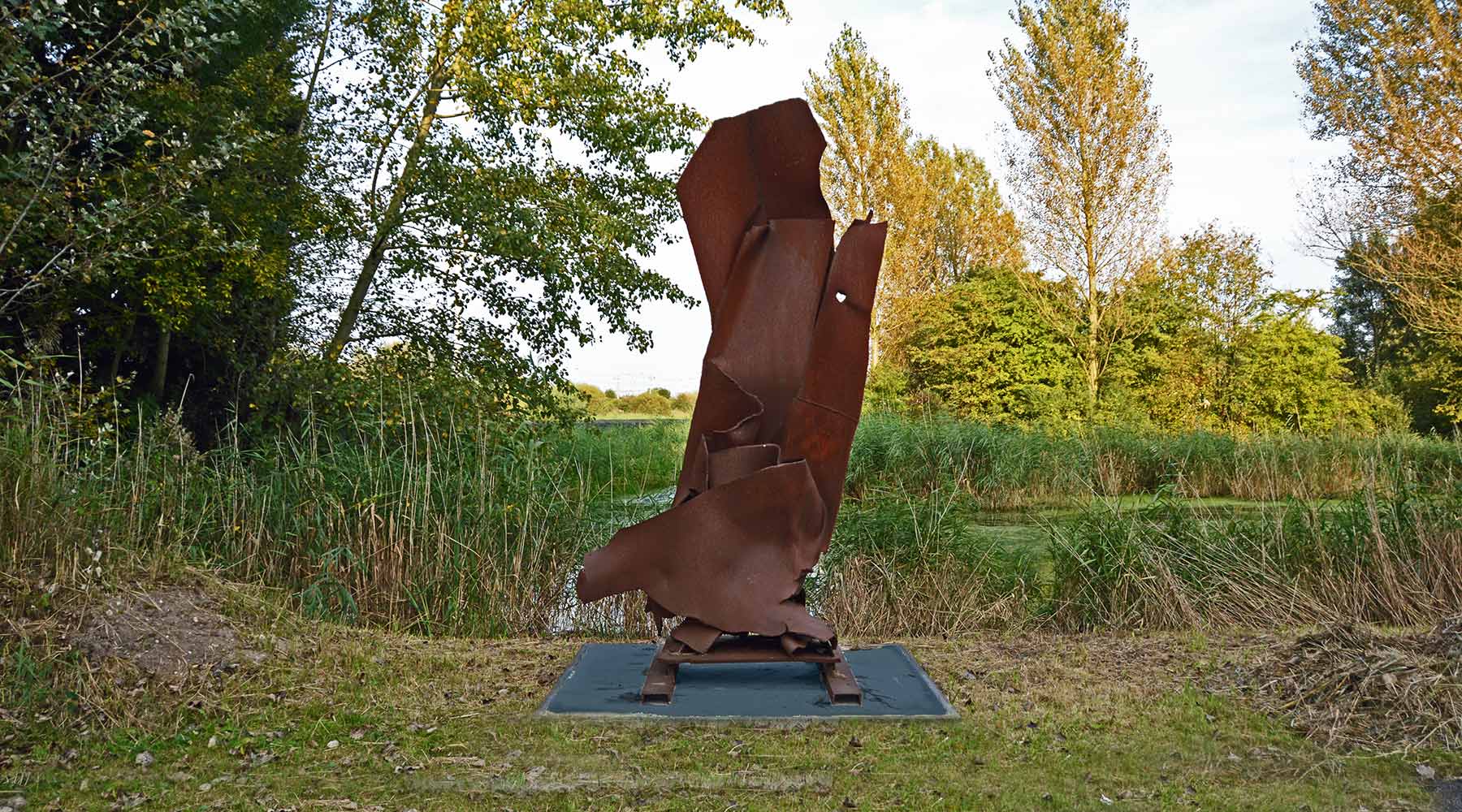 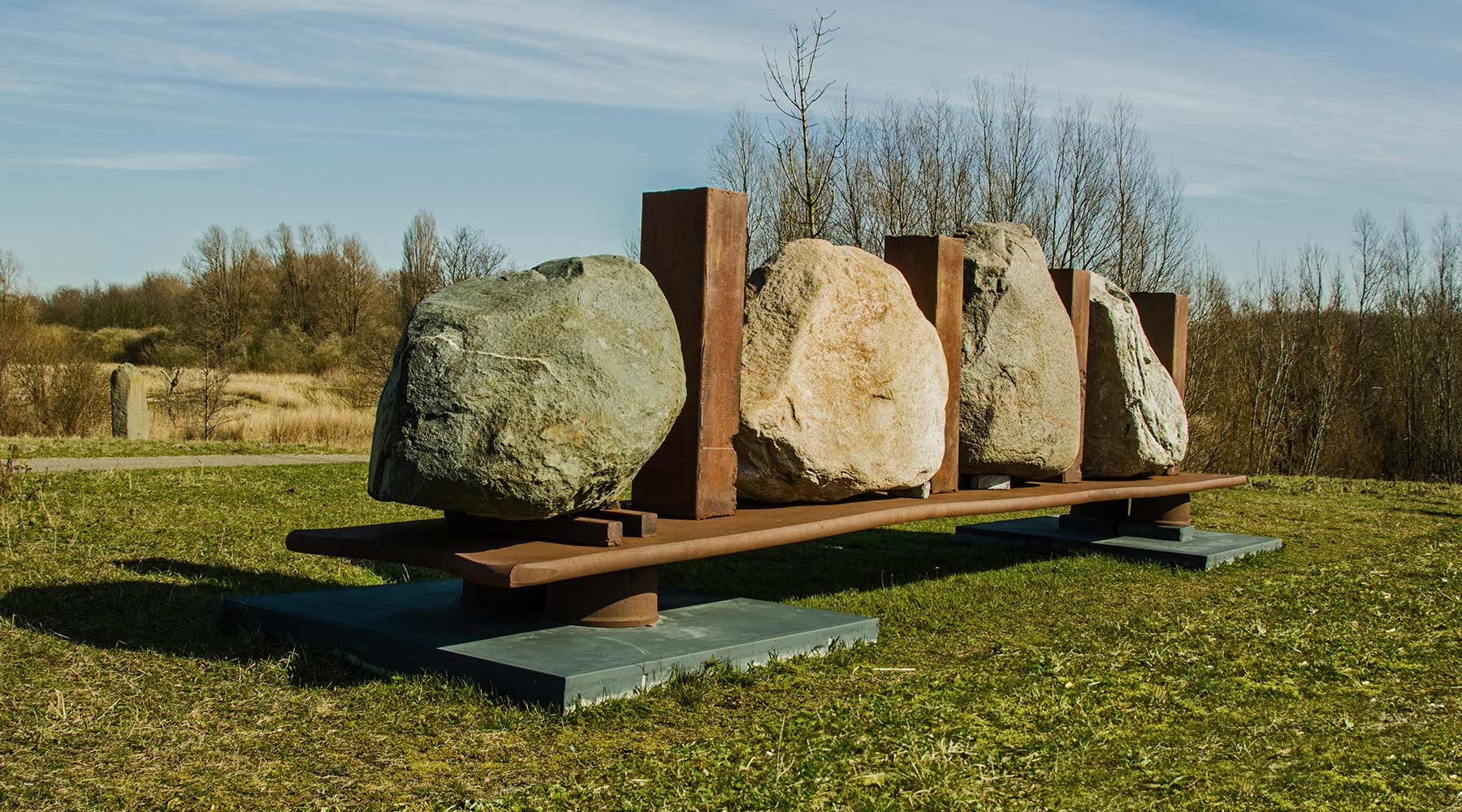 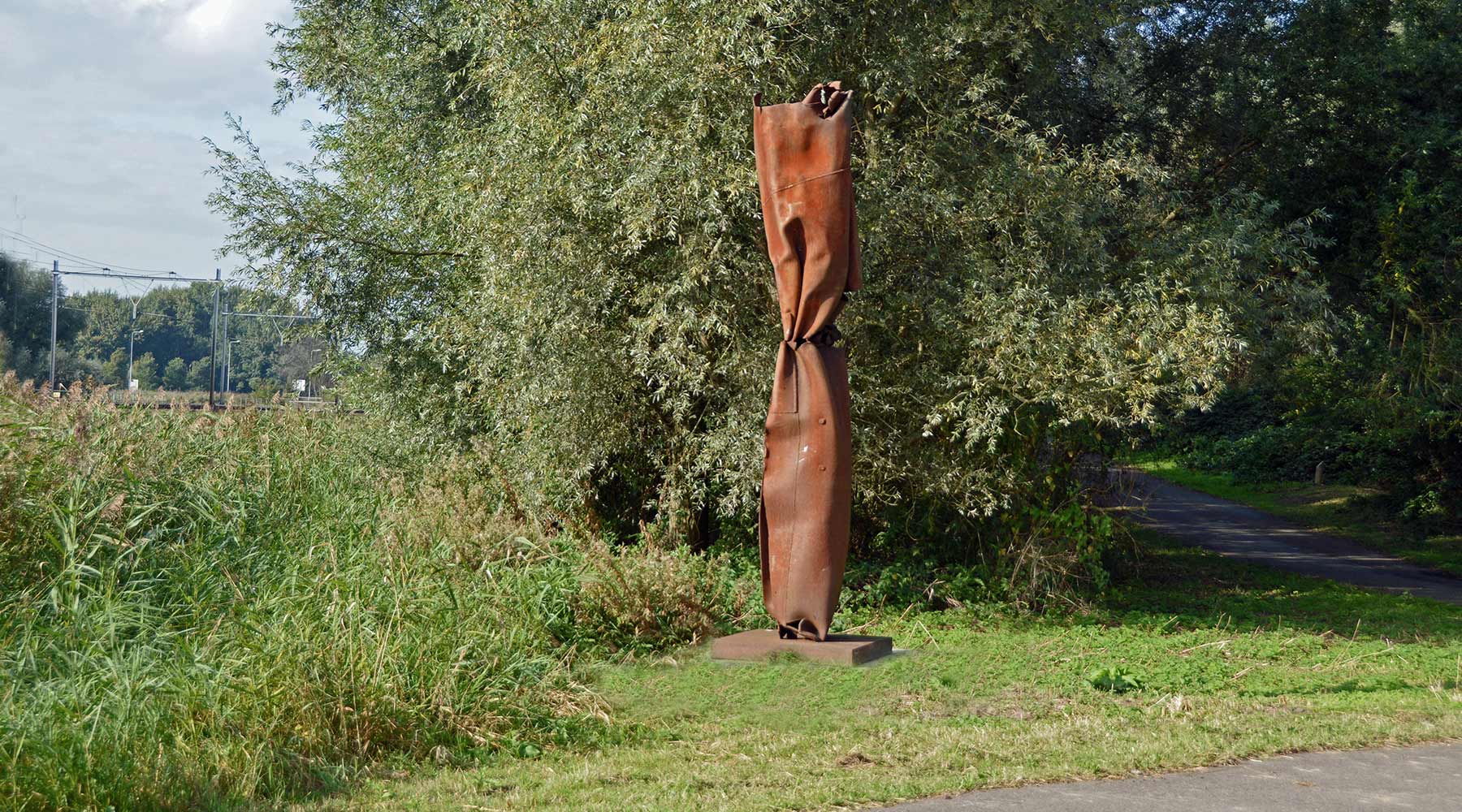 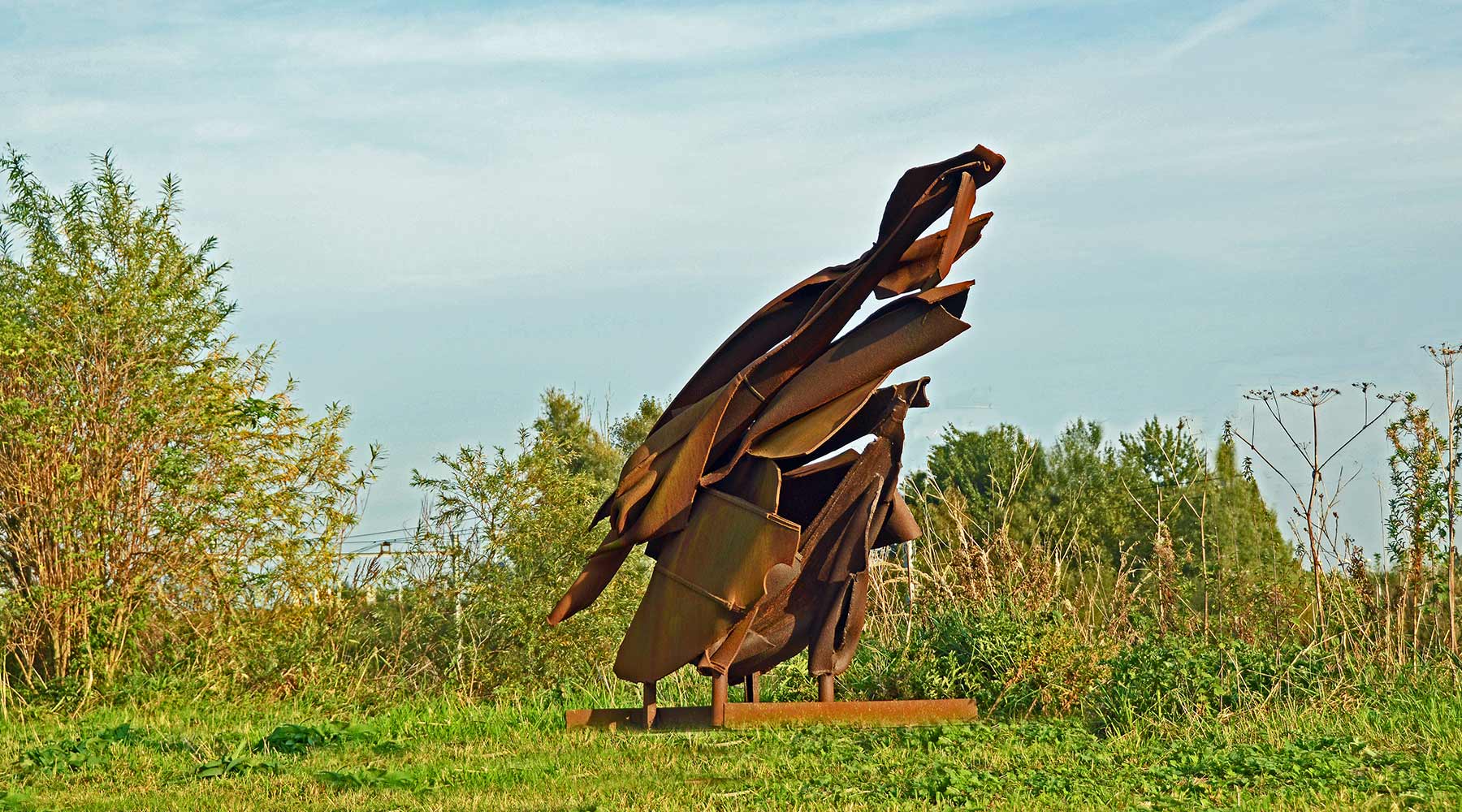 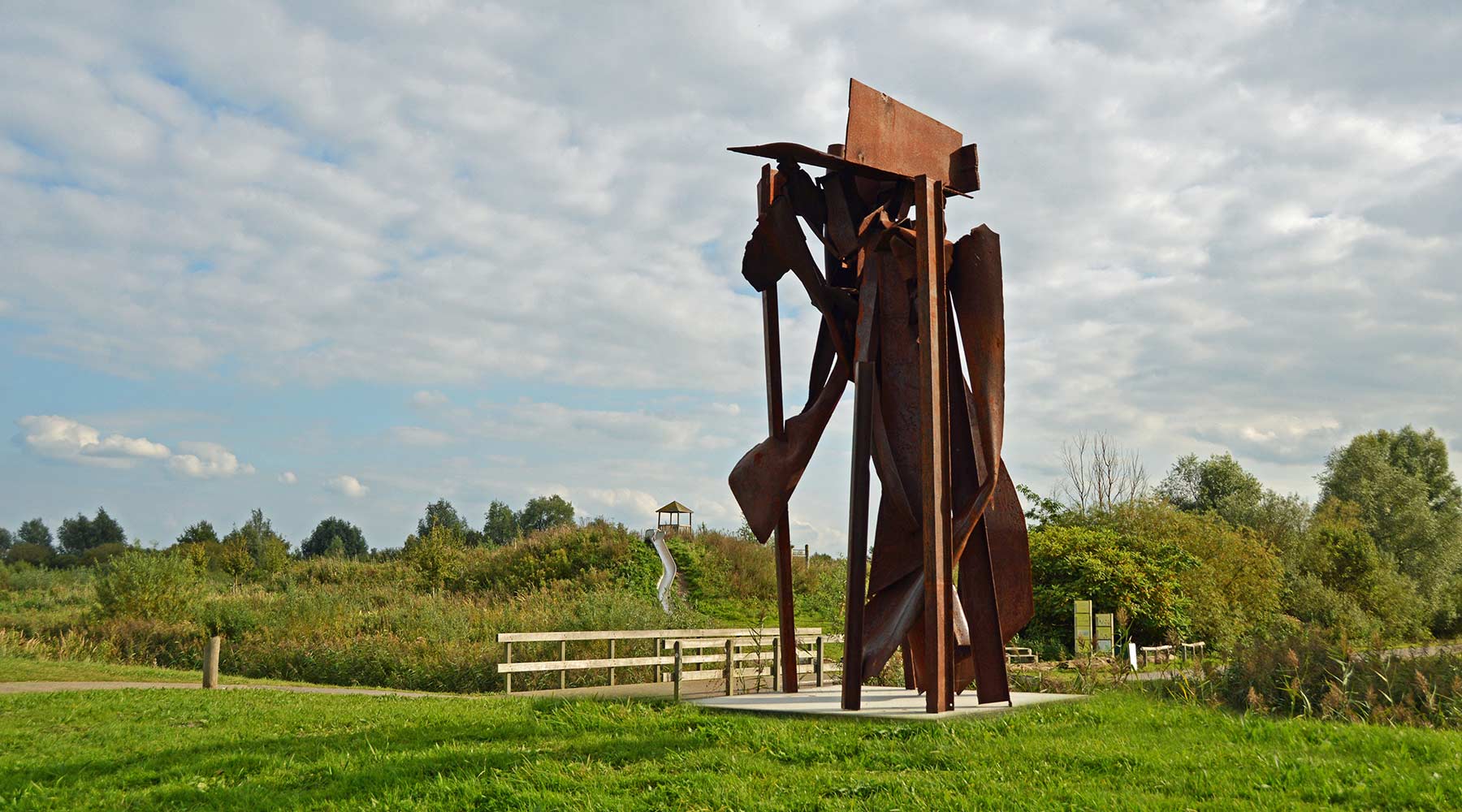 The Brettensuite is a series of 20 sculptures by Herbert Nouwens. This body of works forms a dialogue with the diverse landscapes of the Brettenpad, since 2015.

“The relationship between a sculpture and its surroundings is of key importance to me. I therefore deliberately chose places along the bike and hiking trail ‘Brettenpad’ requiring a landmark. This 7km long path starts in Westerpark, in central Amsterdam, and runs past Sloterdijk trainstation to a rural environment at the outskirts of the city. I positioned the sculptures in relation to one another, inspired by musical suites, which are collections of short musical pieces by 17thcentury composers like Bach, forming a series of dances” – Herbert Nouwens

Remco Daalder, city ecologist Amsterdam wrote a beautiful piece about the Brettensuite at the request of Herbert Nouwens. Eight o’clock in the morning, at the end of February. I take the ferry from Amsterdam Noord to the Houthavens. The ferry is full of cyclists, who after a mooring in a long traffic jam go to Westerpark. It reminds me of photographs of Amsterdam from the fifties. Long lines of cycling dock workers on their way to work. They cycled because they had no money for a car, we cycle because a car has become useless in the city. The sliert cyclists enters the Westerpark, goes towards Sloterdijk. I never realized that this part of the Bretten is such an important commuter route. In the Westerpark cyclists are joined by runners in all shapes and colors. And of urban nature: breeding herons on nests high in the trees of the island, ring-tailed parakeets. Food-seeking gulls cover the grass fields. At the Waternatuurtuin there is a tunnel that leads to the children’s playground Het Woeste Westen. There I see the first sculptures of Herbert Nouwens. They are on either side of the tunnel entrance, as robust sentinels. Despite their size, the sculptures are unmistakably present. They hardly stand out. They fit well with the large stones of the ecopassage that must guide animals through the tunnel. They fit well with the tanned man who is jumping fanatically. These sculptures have a human size and organic forms, just like the Westerpark itself. From the water-wetting garden, teal calls, I hear a green woodpecker laughing. This place is right. The Bretten route is marked with green dots on the asphalt. Follow the dots and you cycle between the allotments and the backs of inhospitable office settlements, towards Sloterdijk. Flowing cyclists, running runners. Forest birds singing from the allotments: song thrush, robin, winter king. A sperwer shoots through the trees. I see the sculpture of Nouwens on the edge of the allotments only at the last moment. Again such a great modesty. No cheeky gesture, no look at me, but a simple addition, an accent for those who want to look good, who want to discover something. And at the same time a meeting place for the allotments, a village pump, we meet at the rusty tree. I am really impressed at the old village of Sloterdijk. Here is an sculpture that looks like a tree stump, on the trunk of a giant fig tree from the rainforest. The statue stands in the water and joins the alder, poplar and carrots around it. On this somewhat misty morning, the sculpture gives the whole place a mystical atmosphere. Organic and just out of this world. A beautiful contrast with the gloomy, wooden sculpture “Ode to the disappeared farmer” by Karel Gomes that is twenty meters away. Then the Arlandaweg. Candle-right, too wide road between not too fancy school and office buildings. Curious, always wind against, a feeling of discouragement overtakes the cyclist. Nouwens has put down sombre, angular figures here that accentuate the practicality of the environment. You will not be happier. After Sloterdijk everyone is suddenly gone and you are only with the green dots on the asphalt and the cars driving along the Haarlemmerweg. Traffic noise reminds us of the murmur of the sea. A cheerful curl from Nouwens near the sports fields makes the mood, which got a dent on the Arlandaweg, clear again. The Bretten are becoming increasingly wilder and stranger to the west. In the ditches, crickets, diving tufted ducks and baltting grebes. Mummant goldheads are just above the traffic. Fossil rolls along the bike path. The sculptures become beacons in the lonely wasteland. Beacons on their way to the coast. They make the almost threatening space more intimate. They are less in number: the city is behind us. At Halfweg the last sculpture waves me farewell. The dunes beckon.

Click on the fullscreen icon on the top right of the map to open the map on GoogleMaps.